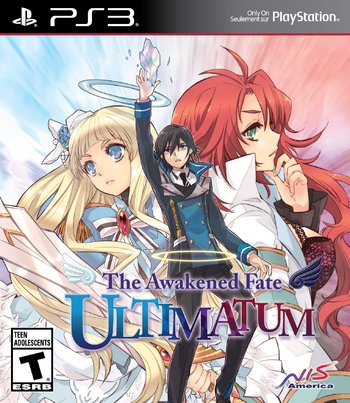 The Awakened Fate Ultimatum is a Roguelike released by Nippon Ichi for the Playstation 3. It is a sequel to The Guided Fate Paradox.

A rather pessimistic young man named Shin Kamikaze was returning home from school one day when several strange figures with black wings descended from the sky and stabbed him through the chest. Just when he thought he was dead, he woke in a laboratory greeted by two figures — the angel Jupiel Soraumi, who fought off the strange figures known as devils, and the imprisoned devil Ariael Agarie, who brought Shin back to life by implanting a special crystal known as the Fate Awakening Crystal. However, by implanting the crystal into Shin, he had become God and must now aid the angels in repelling the devils before they are all wiped out.

Unlike its predecessor, the game utilizes cel-shaded graphics and utilizes a new combat system that allows Shin to tap into either angel or devil powers to defeat his foes. Depending on the color of the enemy or the situation, Shin needs to choose which he powers he needs to use as enemies are weaker against specific powers and said powers with varying abilities (angel powers focus on offense while demon powers focus on defense).