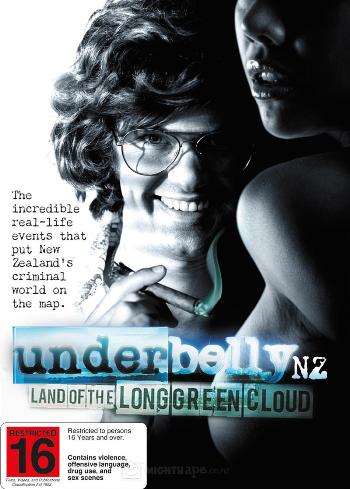 Didn't we already do this story?
"I'm Marty—rhymes with party."
Advertisement:

Underbelly NZ: Land of the Long Green Cloud is a New Zealand spinoff of the Australian Underbelly series based on the "Mr. Asia" syndicate led by Christopher Martin "Marty" Johnstone, based on events which took place in New Zealand, Australia, Singapore, Thailand, and the United Kingdom, between 1972 and 1980.

Analogous to the Australian series Underbelly: A Tale of Two Cities, this Kiwi spinoff focuses on the story of Marty Johnstone (played by Dan Musgrove) and his rise from petty thief to drug lord, and his eventual demise—along with that of the drug syndicate he helped create. Marty, along with Heterosexual Life-Partner Andy Maher (played by Thijs Morris), with the help of "Chinese Jack", begin importing Thai Buddha sticks into New Zealand, setting up their initial success. They then take Terry Clark (played by Erroll Shand) under their wing; however, Clark has an agenda of his own.

The show also shines a spotlight on the changes forced upon the New Zealand Police which, up until then, had been completely incompetent to deal with the influx of weed and heroin brought into Aotearoa. Only through the efforts of Detective Constables Ben Charlton (Jamie Irvine) and Carole Derwent (Holly Shanahan), along with a team of plucky Auckland Star reporters led by Pat Booth (Jason Hoyte), does the Police have a chance at stopping the trade.

Unlike most Underbelly shows, Land of the Long Green Cloud featured only six episodes instead of the usual thirteen, possibly because other parts of the story had been already told in A Tale of Two Cities. The series aired between August and September 2011 on New Zealand's TV3. The cast consisted mainly of local Kiwi actors and was filmed entirely around Auckland.