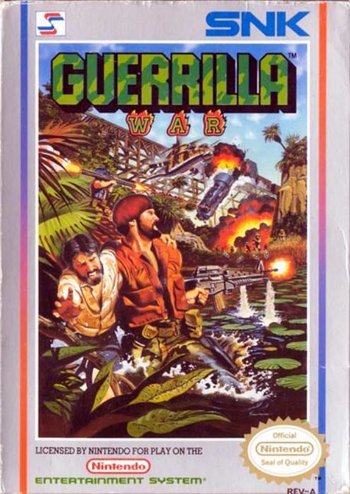 Guerrilla War​ (originally titled Guevara in Japan) is an overhead run and gun game produced by SNK. It was released for arcades in 1987 as a coin-operated Arcade Game. It was ported to the ZX Spectrum and the NES in 1988.

Guerrilla War followed the adventures of two unnamed rebel commandos (Che Guevara and Fidel Castro in the Japanese version) as they raid an unnamed Caribbean Island (Cuba in the originalnote The game was originally loosely based on the real life Cuban Revolution of the late 50s-early 60s) in order to free it from the rule of an unnamed tyrannical dictator (Fulgencio Batista). Along the way the players vanquish hordes of unnamed enemy soldiers (originally part of the Batista regime) while attempting to rescue hostages, collecting weapons from troopers and operating tanks.