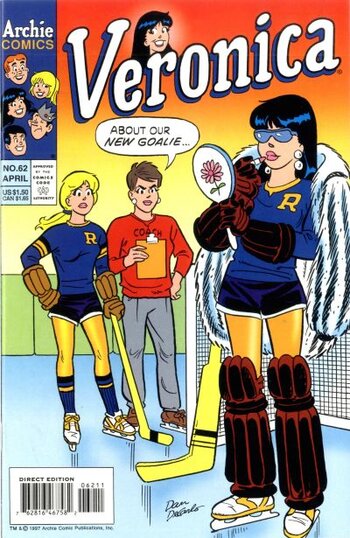 "What the heck are you doing at Gotham Heights High, Master Tim? Your butler sends you to school with a bag lunch that ain't exactly a PB and J sandwich. The clothes you have on cost more than my whole closet. So why aren't you packed away to one of those fancy boarding schools like the rest of the rich brats?"
— Ives, Robin Vol. 2
Advertisement:

Rich and influential people normally have the money and influence to get their kids into the best spots, to get them the best jobs, and send them to the best schools. Yet, in fiction, whenever the plot is set in a school that seems to be populated mostly by middle-class kids, you will always find that one kid from a wealthy family among them.

There can be some explanations: Maybe the kid actually wants to see how the life of the common people is like, maybe they have been expelled from more exclusive schools, maybe their parents are Bourgeois Bohemians and sending their child to public school because of their liberal beliefs, or maybe their parents got in financial trouble and needed to cut spending (with their kid's education being first). But in most cases, this is rarely, if ever, explained or even lampshaded; one would think the only reason they enrolled in this school is to be able to show off their wealth undisputed.

If the rich kid is the main character, expect a Fish out of Water situation while they try to adapt to their new environment. If not, then they will be a Spoiled Brat to serve as a foil and rival for the poorer but more likable protagonist, or a Lonely Rich Kid that the hero must help to come out of their shell.

Compare and contrast with Secretly Wealthy, where the character is rich, but hides the fact, and Slumming It, if the character is engaging in "poor people" activities for fun. Contrast Scholarship Student and Penny Among Diamonds.