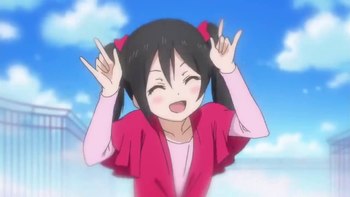 Let's just say that Love Live has a lot of material to work with given that it is a popular multi media franchise filled with expressive characters, Adorkable voice actresses, awesome music, cute outfits and enough Les Yay to massively fill three pages.

", and most agree that they work quite well.

Other
This folder applies to all series.