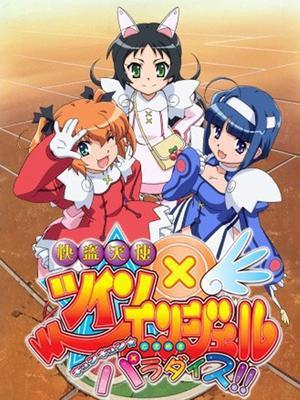 Haruka Minazuki and Aoi Kannazuki, lifelong friends and classmates at St. Cherine Academy, are their school's most admired students, but they also work as Magical Girls, thwarting the nefarious organization Black Auction in their every move, as Red Angel and Blue Angel, respectively. When things go tough, the masked gentleman Misty Knight — resident Chick Magnet Yuito Kisaragi — appears to their aid.

Originally pachinko machine characters, the Twin Angels got a two-episode OVA in 2008. In summer 2011, they got a full 12-Episode Anime series, Kyunkyun Tokimeki Paradise!!, in which Haruka and Aoi earn a new ally in the form of the diminutive Kurumi Hazuki, the White Angel, and clashing head-on with the Twin Phantom — transferees Tesla and Nine Violet.

The series has also spawned a set of eight

A series that loves its tropes and indulges in them shamelessly. Usually runs on the Rule of Fun, Rule of Cool and Rule of Cute.