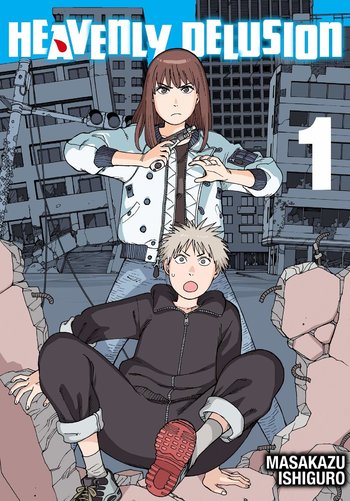 In a walled-up nursery, children are taught their fundamentals by robots. During a pop quiz, one of these children, Tokio, finds a weird and unexpected question:

"Do you want to go outside of what's outside?"

Tokio tries to address this to the teaching robot, but the question disappears on paper as fast as it appeared. Later, Tokio brings this up with the nursery's director as well, who claims that the only thing beyond the walls is hell. Still, several of the children including Tokio wonder what goes on beyond the walls, all the while living mundane lives doing school work and learning how to control their supernatural abilities.

Meanwhile, the outside world has gone to hell in more ways than one. In Japan, not only has civilization devolved into ruined cities and desperate people, there are fearsome monsters roaming the ravaged lands: horrific creatures known as "Hiruko" and “Man-Eaters” who prey upon what remains of humanity while using supernatural abilities to hunt down even the sturdiest survivors. Despite this, a fifteen year old teenage boy named Maru (who looks a lot like Tokio) travels on a journey with his bodyguard, a young woman named Kiruko.

However, neither of them are your average survivors. Maru can kill Man-Eaters using the “Maru Touch,” an ability that allows him to enter a spiritual-like realm inside the monster’s very being and kill them by crushing a heart-like core within, so long as he can physically touch the Man-Eater. Combined with his tough durability and martial arts that he honed during his time on the streets of post-apocalyptic Tokyo, he became a self-made survivor in his own right. Meanwhile, Kiruko is armed with her “Kiru-Beam,” a special (if somewhat unreliable) ray gun that can kill most things in one shot and is also capable of inflicting heavy damage on the Man-Eaters themselves. Having spent many years wandering the harsh environment to survive, all the while using the teachings her Big Brother Mentor Inazaki Robin passed onto her in the past, she has survived many grim scenarios in order to find her place in the world.

Maru is on the hunt for two things: someone who looks just like himself and a place his previous guardian called “Heaven.” On the flip side, Kiruko tags along to protect him as part of her job, but is also searching for several people she knew - including Robin - hoping to discover what happened to them after they disappeared five years ago under mysterious circumstances. However, the tasks before them on their journey are easier said than completed, not to mention there are other dangers on the road besides the Man-Eaters...

Heavenly Delusion (天国大魔境 / Tengoku-Daimakyou) is an ongoing 2018 sci-fi post-apocalyptic Seinen manga written and illustrated by Masakazu Ishiguro (best known for And Yet the Town Moves) and published by DENPA. There is an anime PV

made to celebrate the first volume's publication.

There are two Plot Threads that the story follows, both of which are nicknamed here on TV Tropes for ease of understanding the story. The first one, “Post-Disaster,” features Maru’s and Kuriko’s adventures in a post-apocalyptic setting that ended up this way as the result of an unknown calamity, which had occurred fifteen years in the past from that point. The second one, “Nursery,” features several children in a special nursery surrounded by walls who have special abilities. However, learning more about one plot will spoil details in the other due to several plot twists taking place over the course of the story, so tread lightly. You Have Been Warned.