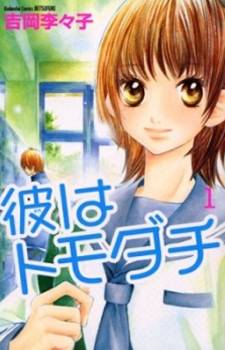 Kare wa Tomodachi is a shoujo manga series by Ririko Yoshioka, which was serialized in Bessatsu Friend from 2007 to 2010.

The series revolves around third year middle school student Hiyori Fujisaki, who has a crush on the most popular boy in school, Yuuma Mizuno. During the classroom seating change, she ends up sitting next to Karen "Ren" Sasamoto and in front of Kotone Kanbara, both of whom are childhood friends of Mizuno, and befriends them.

Though Sasamoto is reluctant to at first, he agrees to help Hiyori out with Mizuno, but things grow complicated between the four when it turns out Mizuno has feelings for Kotone, Sasamoto is revealed to have feelings for Hiyori all along, and Kotone—who has always been protected by Sasamoto—doesn't take kindly to Hiyori's and Sasamoto's growing closeness and seeks to sabotage them. Hiyori eventually reciprocates Sasamoto's feelings and they start dating, while Kotone starts dating Mizuno.

However, in high school, everything changes. Kotone dumps Mizuno with the intention of stealing Sasamoto away from Hiyori through manipulative means. Can Hiyori overcome these trials, or will Kotone's schemes take a toll on her relationship with Sasamoto?