Literature / Every Heart a Doorway 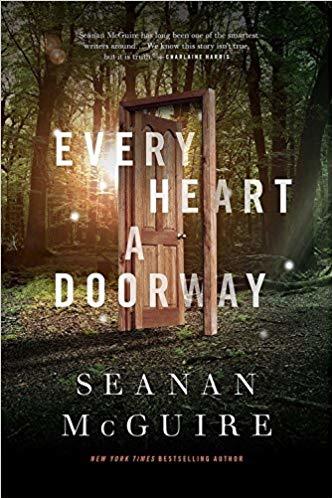 Every Heart a Doorway is the first novel in the Wayward Children series written by Seanan McGuire. What happens to children who go through the wardrobe, or fall through the looking glass, and then come back? Well, some of them go to Eleanor West's school, where no one tries to make them be normal or tells them their worlds weren't real, and where they might just find a way back home.
Advertisement:

Nancy is Eleanor's newest student. She went through a doorway to the Halls of the Dead. When she asked to stay forever, the Lord told her to be sure—and sent her back to Earth. Her parents don't understand why she won't eat a full meal or wear bright colours, so they pack her off to boarding school. There she quickly befriends several other students: Sumi, a madcap girl who went to someplace like Wonderland; Kade, the exiled Goblin Prince in Waiting; Jack and Jill, twins who went to a horror-movie world called the Moors; and Christopher, who became engaged in the world of Día de Muertos. Nancy is just settling in when a classmate is brutally murdered. Who is it? What do they want? And can they be stopped before it's too late?