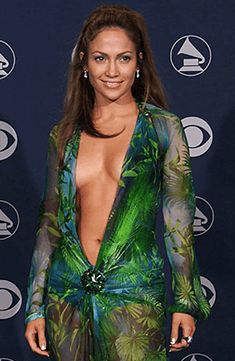 The dress that launched an image search engine.
"You know what's holdin' that dress up, doncha? A city ordinance!"
— Red Skelton
Advertisement:

There are low-cut outfits... and then there is Absolute Cleavage. This is when a dress or top is specifically cut to show the entirety of the wearer's cleavage and the top half of her stomach...or the bottom half if they really want to court tabloid immortality. Since it would only take one careless movement to cross the line of decency, these are bravura costumes; they hold the viewers' attention not only with their daring but the very real possibility of an embarrassing slip-up.

A Spy Catsuit is frequently one zipper away from this trope. Slightly justified in that, if you're dumb enough to wear a tight-fitting catsuit on a spy mission, unzipping the front will give you a lot more mobility in the arms and shoulders.

There may be a visible bra underneath, and sometimes there is an invisible one,note There are special bras that create absolute cleavage without getting in the way: either "plunge bras" where the central wire is bent in a deep "U" shape down to the navel, or ones consisting of adhesive cups with no bands. but generally there isn't. In any kind of real-world or live-action context, the latter case generally requires some form of adhesive to avoid a Wardrobe Malfunction.

Absolute Cleavage can also be the unintentional result of a Wardrobe Malfunction. This can be Played for Laughs or for Fanservice or both, and is quite common in Real Life as well (where it is much appreciated by Paparazzi).