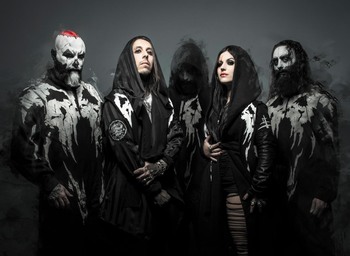 The 2019 line-up of Lacuna Coil
Advertisement:

Lacuna Coil are a Gothic metal/alternative rock band from Italy, starting in 1994. The band is one of the codifiers of the Soprano and Gravel style and blends modern rock and Mediterranean elements into distinct-sounding midtempo rockers. They were formed by vocalist Andrea Ferro and bassist Marco Coti Zelati, and second vocalist Cristina Scabbia joined the band after she was asked to provide session vocals for an early demo, because the band liked the contrasting sound of Cristina's vocals versus Andrea's. The word "lacuna" is Italian for "gap" or "blank," but the band's name is sometimes paraphrased as "Empty Spiral," which also functions as the name of their official fansite

Lacuna Coil recorded a two-track demo in 1996 and signed to Century Media Records, and are still on the same label today. Their self-titled EP was released in 1998, but shortly after the band's original guitarists and drummer — Raffaele Zagaria, Claudio Leo and Leonardo Forti respectively — left due to creative differences. Drummer Cristiano "CriZ" Mozzati and guitarist Cristiano Migliore joined just in time to record In A Reverie, the band's full-length debut, and second guitarist Marco "Maus" Biazzi joined for HALFlife.

Lacuna Coil continued to release one record a year until Comalies in 2002, a New Sound Album which also became their breakthrough thanks to their first-ever single, "Heaven's A Lie." From then on, the band began to spend much more time touring for each album and continued to release a few more singles and music videos to go with each album: three videos for "Heaven's A Lie" and one for "Swamped" from Comalies; followed by videos and singles for "Our Truth," "Enjoy The Silence," "Closer" and "Within Me" from Karmacode. Their fifth album, Shallow Life, saw the band parting ways with their long-time producer, Waldemar Sorychta, and straying further into Alternative Rock territory with their new producer, Don Gilmore. The album saw the release of four singles — "Spellbound" worldwide, "I Like It" in Europe, "I Won't Tell You" in North America and "Wide Awake" in Italy only — and all but the last came with music videos.

In January 2012, Lacuna Coil released their sixth album, titled "Dark Adrenaline," as a darker and heavier follow-up to Shallow Life. Two songs from the album, "Trip The Darkness" and "Kill The Light," have already been released, along with a music video for the former. A second video was released a year later for "End of Time".

2014 saw the band release Broken Crown Halo which would become the last album to feature the two Cristianos, who both retired from the band for personal reasons just prior to its release, as well as Marco Biazzi who retired at the beginning of 2016. Ryan Blake Folden and Diego Cavallotti joined the band on drums and guitars respectively in time for the release of Delirium in May 2016.

Delirium, inspired by a trip to a sanatorium the band did when in the U.S.A, saw a full return to the band's Gothic Metal territory that started with Dark Adrenaline. After touring for the album the band embarked on a 20-year anniversary tour in 2018. Known as the "1:19 Show", the band filmed the London performance for release on both CD and DVD. The band's ninth album, Black Anima, was released in October 2019. In July 2019, Ryan revealed he was stepping down as the full-time drummer for the band (only touring with the band when in the USA). Richard Meiz has taken his place as the drummer accordingly.

Their current line-up is as follows:

Lacuna Coil and their music provide examples of: