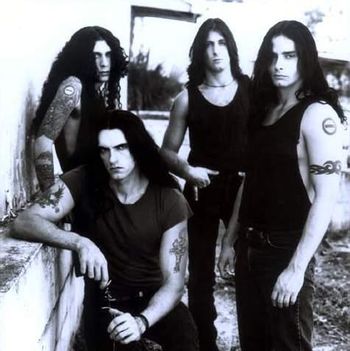 For information about blood types, see AB Negative.
"I went looking for trouble
And boy, I found her.."
"She's in love with herself,
She likes the dark,
On her milk white neck,
The Devil's mark.
Now it's All Hallow's Eve
The moon is full
Will she trick or treat?
I bet she will...
She will!"
"Black No. 1"
Advertisement:

Founded in 1989 upon the ashes of Face of the Band (and Bassist) Peter Steele's earlier band Carnivore, Type O Negative's Signature Style was an unlikely mixture of Black Sabbath, Goth Rock, and Punk. They often used a distinct pop / indie sensibility most visible on the October Rust album. Notable for being one of the pioneers of Gothic Metal. They broke up with the passing of Peter Steele in 2010.