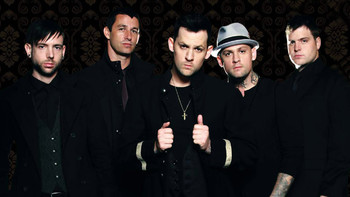 Good Charlotte are an American Pop Punk band from Waldorf, Maryland. Formed on April 1, 1996, by identical twins Joel (Vocals) & Benji Madden (Guitar/Vocals) with Paul Thomas (Bass), Billy Martin (Guitar/Keyboard) and Aaron Escopolio (Drums). Just as the band were about to start writing their breakthrough album, The Young and The Hopeless, Escopolio left to play drums in his brother's band, Wakefield and was eventually replaced by Chris Wilson whilst they were touring in support of TYATH. However, Wilson left the band in May 2005, citing personal health reasons, and he was replaced by the band's current drummer, Dean Butterworth, who had previously drummed with Morrissey.

They reunited in 2015, with new single "Makeshift Love" being released November 5th.

Musically, they are probably best known as the band who wrote "Lifestyles of The Rich & Famous".

Keep your hands off my tropes: