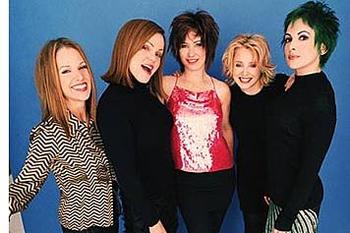 The Go-Go's are an all-female American pop band formed in 1978. They made rock history as the first all-woman band that both wrote their own songs and played their own instruments to top the Billboard album charts.

The Go-Go's rose to fame in the early 1980s. Their debut album, Beauty and the Beat, is considered one of the "cornerstone albums of new wave" (Allmusic), breaking barriers and paving the way for a host of other new American acts. In the beginning, they played primarily a pop-inflected form of the emerging punk sound, and later defined themselves with the distinct sound of 1980s rock. The Go-Go's had five U.S. Top 40 hits. Musical influences include The Ramones, The Shangri-Las, the Buzzcocks, The Beatles, The Beach Boys, and Blondie. During their career, the Go-Go's have sold more than seven million albums.

They started out with Belinda Carlisle (who later had a successful solo career), Jane Wiedlin, Margot Olavarria, and Elissa Bello. Later in 1978, Charlotte Caffey joined, and Bello left the next year and was replaced by Gina Schock. The classic lineup came together in 1981 when Kathy Valentine replaced Olavarria. Although the lead vocalist, Belinda Carlisle, is the most well-known of the band, both with the band and in her aforementioned solo projects, other members of the band have contributed to other projects as well. Jane Wiedlin, the rhythm guitarist, was the writer and co-writer of several of the Go-Go's songs. Away from the group, she had several solo albums, including the top 10 hit, Rush Hour, and an acting career with roles in Star Trek IV, Bill And Ted's Excellent Adventure (as "Miss 'of Arc'"), and Clue, as well as voicing the character Gwen on Mission Hill and Dusk of the Hex Girls in several Scooby-Doo projects.

At least two other groups share the Go-Go's name with them: a British group who released the novelty single "I'm Gonna Spend My Christmas with a Dalek" in 1964, and an American trio who recorded the album Swim with the Go-Go's and a couple of singles for RCA Victor the same year. However, unless you're either a classic Doctor Who fan and/or a 1960s surf pop expert, chances are slim that you'll ever deal with those two groups.

The classic lineup of Carlisle, Wiedlin, Caffey, Schock, and Valentine entered the Rock & Roll Hall of Fame in 2021.