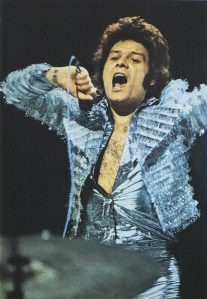 "Mirror, mirror framed in gold, in your depths a story hold... of a rock star WHO BECAME A MONSTER!... With an awful name."
— Glitter foreshadowing how the public would eventually come to see him.
Advertisement:

Paul Francis Gadd (born 8 May 1944), known by his stage name Gary Glitter, is an English Glam Rock musician and convicted sex offender who was successful during The '70s and The '80s.

Due to numerous criminal convictions involving child pornography and sexual abuse of children, it's pretty much impossible for his career to ever continue, not to mention he's currently incarcerated with a projected release date somewhere between 2023 and 2031.

The Execution of Gary Glitter was made as a Mockumentary about him in a Great Britain where capital punishment exists.