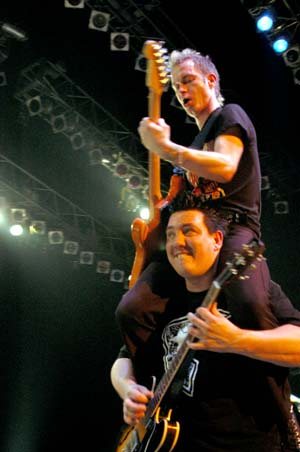 Top: Tom Thacker. Bottom: Theo Goutzinakis. They have fun.
Gob are a Pop Punk band based out of British Columbia in Canada. They formed in 1993, quickly establishing themselves with a self-titled EP, and getting a measure of national fame with their 1995 full-length album Too Late, No Friends. Based around crunchy guitars, a belligerent attitude and occasional hardcore influences (that would blossom later into their career), Gob became a huge favorite on MuchMusic in the 1990s.
Advertisement:

After their second and more successful album, How Far Shallow Takes You, Gob tweaked their sound a bit in order to employ a bit more pop in their Pop Punk. While it was a surprise to their old fan base, it did result in a few big hits like "I Hear You Calling" (from 2001's The World According To Gob) and "Give Up The Grudge" (from 2003's Foot In Mouth Disease). After this, they began to space out their albums a bit more, with a four-year gap between the previous album and Muertos Vivos, a New Sound Album with more experimental material. They then took seven years between that and 2014's Apt 13, which continued exploring the territory on the previous record.

Besides Gob, Tom Thacker also recently joined Sum 41 as a full-time guitarist, and splits his time between the two bands.

The current lineup consists of...

Tropes associated with Gob include: