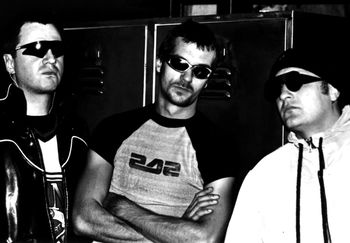 Front 242
One, you lock the target. Two, you bait the line. Three, you slowly spread the net, and four you catch the man!
Advertisement:

Front 242 is a Belgian EBM band and the Trope Namers (but not the Trope Codifier) for Electronic Body Music: this term was coined for their 1984 album No Comment.

Their style, EBM, is a subgenre of Industrial that resembles the Darker and Edgier cousin of Synth-Pop. "Darker and Edgier Kraftwerk" is a good description. The music itself is punk like, aggressive and danceable Electronic Music with mostly conventional (verse-bridge-chorus) song structures.

Although they have not released a full-length album of new material since 2003, they have begun to introduce new songs into their live sets as of 2021.

Unfortunately, Front 242 have at times been accused of Nazism. This accusation is severely misplaced.