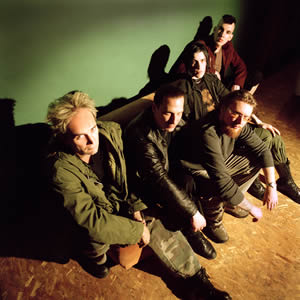 Bill Leeb (under the pseudonym Wilhelm Schroeder) worked with Industrial Codifier Skinny Puppy during the mid-eighties on a few tracks, and provided live support on their early tours. He left the band and decided to start his own project.

His idea was simple: make Skinny Puppy more accessible without losing its edge. In order to do this, he structured his songs in a similar manner to Electronic Body Music bands like Front 242; i.e. he used the verse-bridge-chorus song structure and built his music around infuriatingly catchy bass lines and rousing, anthemic choruses. He also kicked Skuppy's horror-punk attitude and replaced it with a Cyberpunk aesthetic.

During the early days (from 1986 to 1990), the project (composed of Leeb (the only constant member), Michael Balch and Rhys Fulber) released a few small albums and demo tapes. But they first began to receive mainstream attention in 1990; after their album Caustic Grip was released. The single "Iceolate" received airplay on MTV (!).

The sound of Caustic Grip was, for the most part, quite minimal like Electronic Body Music, but with lots of complex drumming and varied sampler manipulations which kept up the sonic variation and made things interesting. Take, for instance, "Resist" (first song on the album, which essentially sounds like Nitzer Ebb with a hyperactive sampler and a catchy chorus). However, there were more complex and atmospheric tracks like "Provision" and "Threshold."

Michael Balch left (hopping aboard Ministry instead for Psalm 69), and Leeb and Fulber set to work on delivering a sequel to Caustic Grip. The result was Tactical Neural Implant (1992) which, to this day, is often considered the project's best work. The album increased the complexity of the sampling and also moved in a much more atmospheric direction; the sonic textures and atmospheres are highly detailed. The drum sounds were slightly less scathing (in general) than Caustic's, the songwriting was much more catchy and choruses more rousing. The album has an extremely Cyberpunk sound and aesthetic (as the title should make clear).

In 1994, the band decided to hop on the bandwagon of Industrial Metal and as such filled their New Sound Album Millennium with Heavy Metal guitar riffs, most of them sampled from established metal bands. The band was never shy of using electric guitars from time to time, but Millennium's sound is clearly much more metallic than before (or since). Needless to say their usual fanbase (who of course hate Trent Reznor for daring to make industrial-ish music that sold copies) cried "Sell Out!" In this case, the attempt to sell out failed and Front Line Assembly had to remain underground. The album has been better regarded by fans and critics since then.

In 1995, the band basically gave the fans what they wanted and in the process actually created what many fans hold to be at least their equal-best album; Hard Wired. Why is it so beloved? Because it's Tactical Neural Implant... but Darker and Edgier! Gloomy, gothic synths and strings share space with hard Cyberpunk samples and basslines, harsh drumming and moderate use of Heavy Metal guitar on some tracks.

Then Rhys Fulber left and was replaced by Chris Peterson. New Sound Album time, again! Oh we all know how the last one went... but hey, change in artistic direction and all that...

Bring on 1997 and the release of FLAvour Of The Weak, which was considerably influenced by breakbeat and drum-n-bass and IDM. And by "considerably," what we mean is "it did not sound like Front Line Assembly." Indeed, it is arguably a fully-fledged case of Genre Adultery.

By 1999, the band had began to integrate their experiments with breakbeats and electronica back into their old sound. The album Implode still contained plenty of IDM, drum-n-bass and distorted breakbeats, and ambient soundscapes, however it managed to bring back the aggression and catchy basslines of the past (at least in some songs). The single Prophecy is one of the project's Signature Songs; containing an ominous-technological atmosphere and combining it with distorted breakbeats and dramatic strings, whilst still wrapping all of those elements around catchy melodies.

2001 marked a more complete return to form with Epitaph. It had a very post-apocalyptic and mysterious atmosphere whilst further refining FLA's electronica/drum-n-bass influences and integrating them into the Industrial base of the sound. This album involved quite a bit of lush melody, and whilst the lyrics could be narmlicious at times, the album as a whole was very atmospheric and cohesive.

Due to the title of the last album, and the fact Chris Peterson left the project, breakup rumors began...only for them to release Civilization in 2004. Rhys Fulber had returned to the project. The sound kept with the post-apocalyptic feel, comfort with melody, and the distorted breakbeats, but also incorporated more rock elements and had a much more organic feel with extensive sampling of acoustic instruments on several tracks.

2006 saw Artificial Soldier, and the band's lineup had expanded to include Peterson, Fulber, Leeb and newcomer Jeremy Inkel. The album had a more cybernetic feel than Civilization; distorted breakbeats (again) and it could be generally described as a faster, less gloomy Epitaph. Which would be wonderful if we could hear it under the extremely loud mastering. Word Of God says that the mastering was a deliberate artistic choice to enhance the rough and distorted sound of the album, but over-compression also thins out the drum sounds and adds clipping to the sound. Needless to say, the album has been criticized by some for the mastering.

In 2010, the band released Improvised.Electronic.Device. Bearing a more Industrial Metal sound than usual, it certainly is a change from the previous three albums.

2013 saw the release of Echogenetic. Following in the footsteps of their soundtrack for the game AirMech, it is heavily influenced by Dubstep, and lacks the Industrial Metal edge of their last album, as it has no guitars at all.

Wake Up the Coma was released in 2019, after the death of Jeremy Inkel and the return of Rhys Fulber.