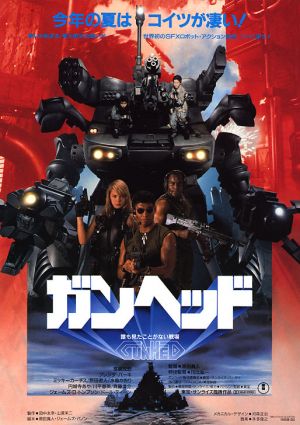 GUNHED is a 1989 Tokusatsu film about a group of human scavengers who go to an island to find a rare and valuable element, known as Texmexium, and get picked off one by one by a renegade supercomputer housed in a complex on the island. The computer is called Kyron-5. Soon, only the group's mechanic, Brooklyn, is left alive. Brooklyn soon finds company in the form of a Texas Air Ranger named Sergeant Nim, and two children. One of the scavengers who was killed earlier is transformed into a Biodroid and is sent after Sergeant Nim and the Texmexium that she stole. With me so far? Anyway, Brooklyn soon finds a GUNHED (Gun Unit Heavy Elmination Device) combat robot and works to restore it. In order to save Sergeant Nim, Brooklyn must overcome his fear of flying and pilot the newly restored GUNHED and defeat Kyron-5 and the various defenses it controls.

If you mistook this for a Gundam entry, you'll be forgiven, as the two names do sound similar, and were produced by the same company (who whom later created a Tokusatsu Gundam film a decade later). Toho, of Godzilla fame, also helped in the production of and distribution of this film.

Gunhed provides examples of the following:

Nim: You fix it, you drive it.