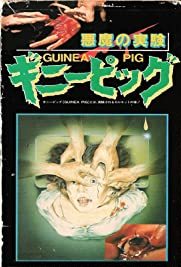 The film is presented under the In-Universe guise of being a real recording that was sent to Ogura on tape several years prior to its release, as is explained in its opening text. The tape shows three men having kidnapped a woman, who they then subject to absolutely vicious torture under the purported goal of measuring the human pain threshold and seeing how much suffering she could tolerate before dying.

This film has 5 sequels, a 1991 Clip Show of the goriest scenes, and a 4-film Spin-Off series made in the US.

The 1990 film Lucky Sky Diamond is sometimes grouped with the series as Guinea Pig 7, despite having no "official" connection to the other Guinea Pig films.