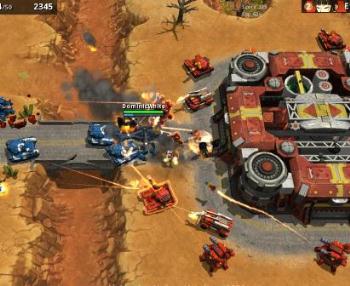 You got Action in my RTS!
AirMech is an Action / Real-Time Strategy hybrid game by Carbon Games (formed by the developers of Fat Princess), heavily inspired by Herzog Zwei. Players control the eponymous Humongous Mecha, which is also a Transforming Mecha: they can fly and airdrop units, or land on the ground to trade shots with the enemy.
Advertisement:

The objective is to destroy the opposing team's base, just as in a Real Time Strategy game. But as in Herzog Zwei, the player cannot directly damage the base. Instead, players can build a variety of units to attack, defend and capture bases to collect resources, and only those units can destroy the opponent's base. Fortunately the AirMech can pick up and airlift any unit their team owns.

No game is complete without customization, of course. You can only bring eight units into battle at one time, varying from infantry to scout vehicles to heavy tanks to artillery to stationary defenses, and many of them have more specialized models that can be purchased with "Kudos" (earned after every match as currency) or "Diamonds" (paid for via microtransactions). There are also a number of different AirMechs and pilots for same. Items are trinkets that provide stat boosts, albeit less than the pilots themselves, and lastly, custom parts, which provide trade offs with their stats.

Air Mech Strike is free to play. It is in it's late beta stages and is continually being overhauled. Players can either sign up for the Windows version