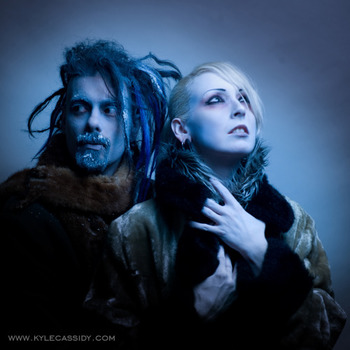 Ego Likeness is a Darkwave/Industrial Rock band from Baltimore, Maryland. It was formed in 1999 by Steven Archer and Donna Lynch, the same year as their marriage.

Their music is darkly atmospheric, often lyrically at the cynical end of Sliding Scale of Idealism Versus Cynicism, while their songs refer to subjects from sources such as Classical Mythology, Abrahamic religions, horror films, and science-fiction literature. After all, they did take their name from Dune.

They have toured extensively with Angelspit, Ayria, The Cruxshadows and Voltaire throughout Europe and North America and are currently signed to Metropolis records.

The Compass series of Extended Plays

In addition to their music, Steven is a painter and Donna a novelist and poet. Their website is here