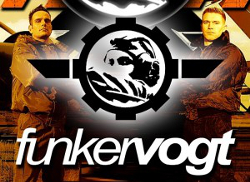 Funker Vogt are a German Electro-Industrial band founded by Jens Kästel and Gerrit Thomas in 1995. "Funker" is German for "Radio Operator" and "Vogt" is a German surname— the band was named after Stephan Vogt, a friend of Gerrit Thomas who was a military radio operator. Much of their work is about various aspects of humanity's violent nature and how War Is Hell for everyone involved.

In 2013, Sacha Korn (codenamed Sick Man) replaced Jens Kästel as lead vocalist after the latter's retirement. Controversy erupted when it was brought to light that some of Korn's work has been featured on a far-right compilation CD.