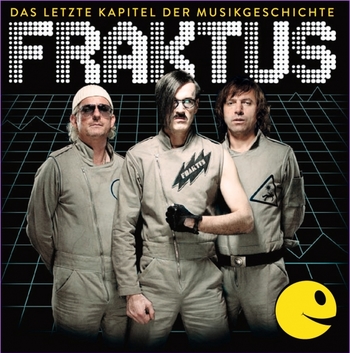 Fraktus started out as an experimental band named Freakazzée in Brunsbüttel, Germany (then known nationwide for its brand-new nuclear power plant and the accompanying protests against nuclear energy) in 1978. The members were:

One day in 1980, the young producer Thorsten Bage saw them at a disco in Brunsbüttel. He decided that while they were horrible, they had some potential, and they were partly ahead of their time. He joined them as keyboard and flute player and producer, and after some discussion about band names, the band renamed itself Fraktus and went through a change in style. Meinhard Gnom was removed from the band itself but mixed them for a while and remained their roadie. He was replaced by the Beater, an electro-mechanical rhythm machine and one of Bernd Wand's several inventions for the band.

They had several releases until 1983:

Released on a small indie label, 7353=057 became a milestone in music history, the first album on which a four-to-the-floor beat was used in electronic music. However, Blixa Bargeld supposed that they simply couldn't do any better. 7353=057 didn't become a hit, so while it inspired many musicians and producers (many of whom actually ripped Fraktus off, certain not to be caught anyway), it became largely forgotten like the other Fraktus releases—the even bigger milestone Tut-Ench-Amour as well as their two major releases (which caused their fans to call them commercial sell-outs), Affe sucht Liebe whose title track was kept from charting higher than number 21, and Automate. Fraktus' sound was still copied mercilessly while the originals fell into oblivion.

The end came in late 1983: The band played at the Turbine club in Hamburg when their Theremin short-circuited and caused a fire which burned down the entire building; a parking deck was erected in its place later. Having lost all their custom equipment, the band split up, not even to be remembered by hardly anyone. Dickie Schubert stayed in Hamburg, Bernd Wand returned to Brunsbüttel to work at his parents' optician's shop and get his parents to join him in an even more experimental project called Fraktus 2, and Thorsten Bage eventually went to Ibiza and became a successful producer of shallow German party pop.

One of the few who remembered Fraktus was the Record Producer Roger Dettner. First he decided to produce a Rockumentary about them, find and interview all three. But already while preparing to do so, he planned to get all three together for the first time in more than 25 years, and while he was at it, he wanted to reunite them as the band Fraktus and perform together again.

The first result of Roger's attempt at reuniting them was that they started bickering and almost beating each other up again. Nevertheless, he got them to try to make music again. But their sessions at Thorsten's Ibiza studio suffered from a severe lack of inspiration. Next they tried to perform live as surprise guests at a festival in Hamburg where they ended up being booed by the audience.

Their second studio visit didn't go ahead as planned either. The infamous pop producer Alex Christensen was hired to produce a new version of their almost-hit "Affe sucht Liebe". He was given some original Fraktus material, but he throws all of it away, composed half a new song loosely based on the old arrangement, and re-recorded everything himself together with the singer Yazz. Fraktus weren't even allowed inside the studio during the production process. Their involvement in "Affe sucht Liebe 2.0" was limited to a ridiculous appearance in the music video. Being discontent with the outcome, they nixed the release and the entire reunion, causing Roger to drink himself senseless and run amok.

One last chance was offered to them as Meinhard Gnom resurfaced. He said that their instruments were not destroyed in the Turbine fire, but he had rescued them and taken them to safety, and he was still in possession of them. Roger, now hiding from the police, gathered them, the band members plastered the city with concert posters over night, and Fraktus eventually played a successful and celebrated comeback gig at the parking deck where the Turbine used to be.

The best part about Fraktus' history, however, is: None of all this is true. Fraktus are actually a product of the Northern German comedy trio Studio Braun in a successful attempt at faking a So Bad, It's Good and thoroughly dysfunctional electro band to be portrayed in a Mockumentary named Fraktus: Das letzte Kapitel der Musikgeschichte (translates to Fraktus: The last chapter of music history). Heinz Strunk, the author of the semi-autobiographical Fleisch Ist Mein Gemuese and starring more or less As Himself in The Movie, is Thorsten Bage, Jacques Palminger is Bernd Wand, and Rocko Schamoni, author of Dorfpunks, is Dickie Schubert. Their music was actually produced by Carsten "Erobique" Meyer.

Despite being a Fake Band, Fraktus went on a tour through Germany around the time of the film release. The Studio Braun guys keep bringing back Fraktus every once in a while.

Their actual releases are: