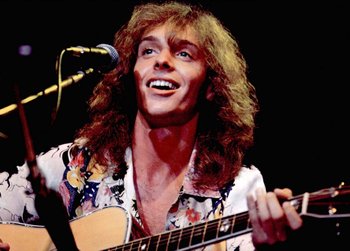 "Exqueese me? Have I seen this one before? Frampton Comes Alive? Everybody in the world has Frampton Comes Alive. If you lived in the suburbs, you were issued it. It came in the mail with samples of Tide."
—Wayne Campbell, Wayne's World 2
Advertisement:

One of the original guitar heroes, Peter Frampton (April 22, 1950-) is an English singer, songwriter and guitarist best known for his multi-platinum Live Album Frampton Comes Alive!, the biggest selling album in the United States in 1976.

After receiving piano and guitar lessons in his youth, Frampton started off in a hit-making British Invasion band called the Herd at the age of 16 before joining Steve Marriott of The Small Faces in the Blues Rock group Humble Pie and playing on sessions with several major stars. He started his solo career in 1971 and soon found success easier in America than his native United Kingdom.

His commercial peak was Frampton Comes Alive! in 1976, the prototypical Arena Rock live album which solidified Frampton's status as a Teen Idol and even won him an invitation to perform at the White House. However, although the studio follow-up I'm in You was well-received by critics and gave him his biggest hit single, its experimental nature alienated many of his teen fans. His appearance in the Sgt. Pepper's Lonely Hearts Club Band film turned out to be the end of his hit-making career.

Frampton continues to record and perform, and has made some contributions to film and television; he made a memorable (and mostly ad-libbed) guest appearance on The Simpsons episode "Homerpalooza" and was a consultant on Almost Famous.