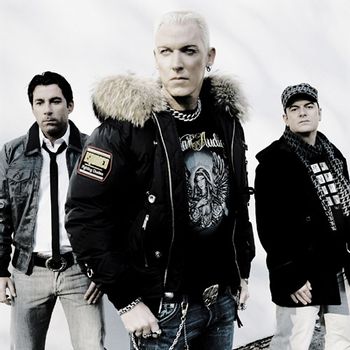 Scooter are an electronic music group from Hamburg, Germany. The band formed in 1994 by H.P. Baxxter and Rick J. Jordan, after the dissolution of their new wave band Celebrate the Nun. The band was formed when the two members teamed up with producer Ferris Bueller (real name Soren Buhler) to record a single called "Vallée De Larmes", which was a soundalike cover of a French house song by Rene & Gaston released the previous year. The B-side was a song called "Cosmos", an original composition. The group played some DJ shows with these two songs. At one show, Rick began playing an original instrumental piece of his, which inspired H.P. to spontaneously rap lyrics over it. This met with such a great response that the band decided to record it in studio, titling it "Hyper Hyper". This was released as a single and became a big hit, which inspired the members to take Scooter seriously, leading to their first album ...And the Beat Goes On. The band recorded many further singles and three more albums with Bueller, focusing mainly on the happy hardcore, techno, and trance styles whilst adding influences from other genres such as rock, new wave, ballads, and drum and bass.

In 1998, Bueller left to be replaced by Axel Coon, an event marked with the release of the singles and B-sides collection Rough and Tough and Dangerous, and the announcement that it was the beginning of The Second Chapter. The band moved onto a more serious trancier style. Another breakthrough would come in 2001, when their song "Ramp! The Logical Song" became a massive hit worldwide, especially in the UK where they had not had very much success. They followed this up with "Nessaja", which was almost as successful, and a reissue of "Posse (I Need You on the Floor". A compilation album called Push the Beat for This Jam (The Singles '94-'02) was released there and became very successful too (in Germany, its equivalent release was a 2-CD single and B-side collection which did not feature "Nessaja").

Coon was replaced by Jay Frog at the time of "Nessaja" - both members worked on the song, beginning The Third Chapter. The band released several more singles and the album The Stadium Techno Experience in the UK, with dwindling popularity. After the release of the single "Jigga Jigga!", which flopped, the band did not release anything in the UK for several years until 2008.

Frog was replaced with Michael Simon in 2007 (The Fourth Chapter). The band released the album The Ultimate Aural Orgasm with him. Their second album with him, Jumping All Over the World, was released in the UK thanks to their popularity on the Clubland tour, and surprised everyone by making Number 1 in the album charts, especially as it was the first time the band had released anything there since 2003. During this time, the band experienced massive Flanderization, with a constant reliance on female sung choruses with high pitched vocals, often singing cover songs without crediting the original artists, and constantly using bouncy, repetitive rhythms called jumpstyle. This had proved to be successful for them occasionally in the past ("Ramp!" being the biggest example), but on Jumping All Over the World and beyond it was used on almost every song. There is a pretty obvious Broken Base because of this. The band have released several more albums, incorporating dubstep and r&b influences and further alienating their old fans, H.P. even claiming he's in it for the money now.

Tired of H.P.'s obsession with writing to a generic formula to make money, Rick J. Jordan announced his plans to leave the band in 2014. He was replaced by Phil Speiser of Dirty Disco Youth, and The Fifth Chapter began. In 2019, Speiser was replaced by Sebastian Schilde, thus starting The Sixth Chapter.

Whilst the band have been around for years, and remain a divisive subject, they remain one of the most popular and influential German bands there is.

This band exhibits the following tropes: