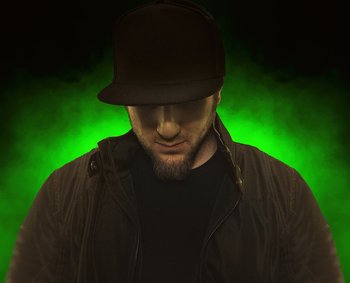 "Let me see you throw your X up!"
"Widespread reports of the infectious "X virus" are pouring in, as people around the world are beginning to panic. Medical experts have informed us that alteration of human DNA has led to the creation of an entirely new type of virus. This "X virus" is somehow able to spread through soundwaves, rearranging and permanently modifying humans on a cellular level. By creating auditory and visual hallucinations, it starts with seemingly random changes in pitch, until slowly, the infected begin to lose the ability to understand language. You may begin to feel disoriented as sounds become more distorted and volume increases. Your body begins to vibrate. Time slows down, as reality disappears."
— The opening narration of "Virus".
Excision (real name Jeff Abel) is a Canadian
Advertisement:
dubstep producer, active since 2004. He is best-known for his collaborations with fellow Canadian dubstep producers Datsik and Downlink, and along with the aforementioned artists, is credited as a key player in the so-called "brostep" scene; his musical style, characterized primarily by the use of atonal melodies, disorienting song dynamics, and extremely brutal bass drops influenced by brutal/slam Death Metal, Industrial and Harsh Noise, has allowed him to gain massive recognition among fans of extreme music subgenres.

He has collaborated with Pendulum (The band asked him to remix their 2009 single "Showdown"), Legacy, SKisM, Mr. Hudson, Messinian, Sullivan King, Illenium, and Savvy, among many other artists.

He is also known for his flashy and multicolored live shows, complete with highly advanced and powerful sound systems. He has his own custom stage for showcasing these: the Executioner stage, a sound system with a power of 150 thousand watts, giving an ear-splittingly loud yet crystal clear sound, almost akin to his studio recording. He would soon retire the stage in 2015, only to introduce The Paradox, its successor, the following year.

In 2012, he formed the Industrial Metal Super Group Destroid together with Downlink and ex-Pendulum drummer KJ Sawka.

In 2017, he debuted Lost Lands, his own dinosaur-themed, bass-centered music festival, to universal acclaim.