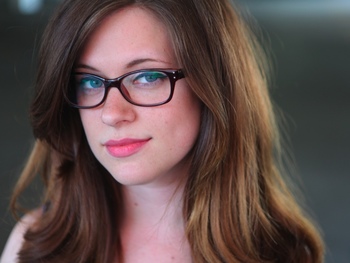 What if your average pop-culture obsessed, geeky troper was combined with a pretty, stuggling female musician on YouTube? Then perhaps you'd have the teen hormone-drenched songs of Allison Beth Goertz (born March 2, 1991).

Combine the wit of Bo Burnham, a modern folk feel voice, all the nostalgic shows and geeky references you can handle with a wonderful high voice and an introspective, melancholy twist. Fan fiction-y songs often revolving around the inner termoil of fictional characters, unrequited love and adolescent angst. These expriences are undoubtedly mined from her personal life as great art often is (just gender swapped, as most of her characters are male). These songs are often Bathos, combining your sympathy for characters like Sam Weir from Freaks and Geeks with quiet one-liners. Sometimes she sings with back up singer Megan, Allie has been described by one Youtube commenter as being like "Jonathan Coulton sans beard", probably because of her unsual song subject matter, indie feel while still having a geeky appeal; as they sympathize with their socially inept, obsessive, and sad protagonists.

In addition to her musical work, she’s co-hosted a couple of podcasts and served as a social media producer for @Midnight and an editor for MAD magazine during its short-lived West Coast reboot. She's also dabbled in acting, even appearing in an episode of Arrested Development.

Allie Goertz and her music contain the following tropes: