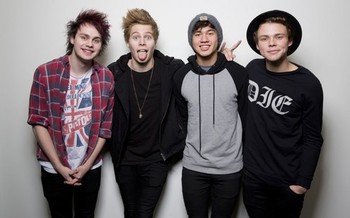 5 Seconds of Summer (commonly abbreviated as 5SOS) are a Pop Rock / Pop Punk band from Australia. The group formed in Sydney, Australia, in December 2011, and slowly started to gain an international following. The group really started to take off when they were given a gig as the opening act for One Direction's 2013 "Take Me Home" arena tour. The next year proved to be a huge breakout for them, as they nailed a #1 album in dozens of countries and began to explode in popularity. They re-teamed with 1D for their 2014 "Where We Are" stadium tour and went on their on their first headlining tour, "Rock Out With Your Socks Out" in 2015.

In 2018, 5SOS largely bucked their pop punk style for moody electronic SynthPop rock on 2018's "Youngblood". This Genre Shift carries onto their fourth album, C A L M, received two standalone single releases (Teeth and Easier) in 2019 before being officially announced for release in 2020.

Members of 5 Seconds of Summer include: