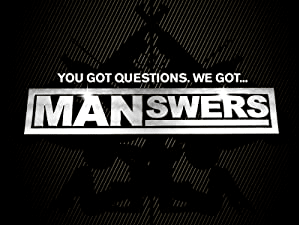 How Can You Kill a Bear With Your Hands?
How Much Does a Man Fart in a Day?
What Smell Turns Women On the Most?
How Can a Guy Get High Legally?
Which Nationality Is Most Likely to Put Out on the First Date?
How Can You Get Paid to Get a Tattoo?
Who Drives Better, Men or Women?
How Do You Take a Stripper Home?
— Questions from the series premiere.
Advertisement:

Manswers was a show than ran on Spike TV from 2007-2011. Its format consists of asking a series of questions that the (college-aged male demographic) viewers presumably want to know, though viewers are also encouraged to send in requests. Thus, the questions generally involving sex, alcohol, animal attacks, or some combination of the three, though slightly more "cerebral" questions occasionally creep in. A season subtitled "Harder Faster" focused more on sex and less on . . . everything else, and a season subtitled "Shock and Awe" focused more on war and military related topics. No matter the season, though, explosions and volume are in abundance. And fanservice. Did we mention fanservice? 'Cause there's a lot of fanservice.