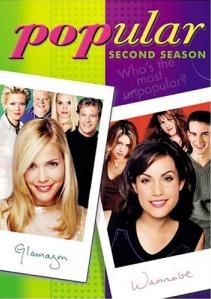 Once upon a time, there were a pack of Cool Loser brunettes, led by a girl named Sam. One day, she got into a squabble with Brooke, the leader of the Girl Posse of blondes at her school. Imagine their surprise when the two of them found out that their single parents are now dating each other. And want to shack up. Off-and-on wars ensue, both at home and at school.

Everyone is obsessed with popularity, down to the teachers. The popular crowd get their asses kissed, the Cool Loser crowd get into fights with them, while the actual Nerds try to swim up from the bottom. Much No Going Steady and crossing of the popularity lines ensue, along with doses of surreality and silliness galore.

This teen dramedy series, which aired on The WB for two seasons (1999–2001), is notable for being the first show created by Ryan Murphy, who'd experience more success following the cancellation of this show.

There are also BUTTLOADS of twins on this show.