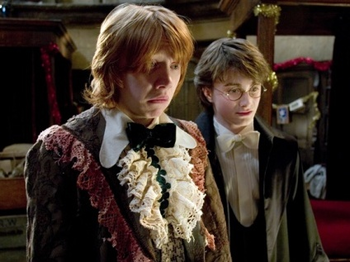 It's Prom Night! Or it's a wedding! It could be Shlomo's bar mitzvah, but no matter what kind of an event, Weirdo McGeek is invited as well. And what kind of garment did he choose to show up wearing?

A frilled shirt, a bowtie or Classy Cravat, a cummerbund, and a tuxedo in baby blue. All 100% polyester.

It's a disco-style tuxedo John Travolta could barely look good in, but the Hollywood Nerd usually comes dressed up like this to a fancy event. Usually an over-the-top exaggeration of the schizoid styles used in the Real Life 70s, falling out of fashion as disco music died downnote This in the West. You can easily see ruffled shirts in Asian and Arab countries. Frilly shirts and big ties in particular made a comeback during most of The '90s and The Aughts until the very early 2010s, although suits had more conventional schemes.

A Sub-Trope of Impossibly Tacky Clothes.

Contrast Sharp-Dressed Man (where the tux and the guy look good). Often found in a Lounge Lizard's wardrobe.