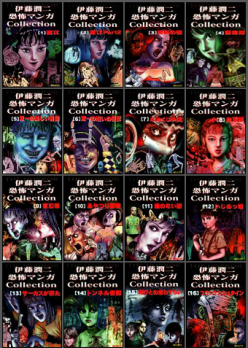 The first and longest anthology serial of horror master Junji Ito's work. Totaling 16 volumes and including several subseries among the short stories, the collection's most notable contributions may be that it featured the first collection of his famous Tomie series and that it introduced many unconnected and wildly varied one-shot stories that defined Ito's range.

In addition to the Tomie stories, the manga includes the short Lovesickness series and multiple stories about Souichi, a creepy brat who partakes in supernatural mischief; Oshikiri, a boy with a height complex and several run-ins with parallel dimensions, the Strange Hikizuri Siblings; a creepy and severely dysfunctional family unit, and finally, Ito's own take of Frankenstein.

The manga has also been published under the name Museum of Terror, with the difference being the order of some of the stories.

Though they were included here, tropes from Tomie and Lovesickness should go on the two series' own pages.

An anime adaptation of a select number of chapters, simply called The Junji Ito Collection, was released in 2018. Consisting of 25 stories over 12 Two Shorts format episodes and a two-part OVA. Reception was generally mixed, largely due to the conversion being far less scary in addition to being noticeably low-budget with simplified backgrounds and character design and limited animation.