Film / The Three Stooges: The Movie 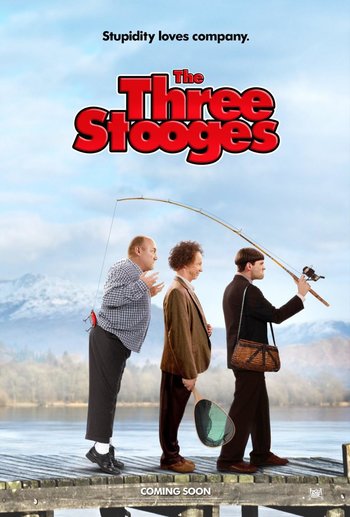 Just Say Moe.
Directed by the Farrelly Brothers (Dumb and Dumber, There's Something About Mary, Shallow Hal), The Three Stooges: The Movie is a feature film adaptation based on the titular comedy team; with Chris Diamantopoulos, Sean Hayes, and Will Sasso playing the trio of Moe, Larry and Curly respectively. In the film, the Stooges were sent to Sisters of Mercy Orphanage, where they later on live in for 35 years with barely any chance for adoption. Come present day, their home is being foreclosed, so they plan to save it in whatever way to raise $830,000. Unlike Columbia Pictures that distributed the original shorts, 20th Century Fox distributes this movie.
Advertisement:

The film was released on April 13, 2012, after many years in Development Hell. A sequel

is in development, as well as a prequel.

The Three Stooges: The Movie has examples of:

"Kids, do not poke anyone in the eye; it's very dangerous."
"The point is, this movie's all about fun and games, so please play safe at home. Thank you."