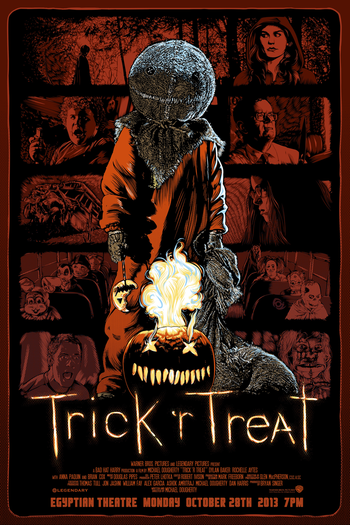 Always check your candy.
Poison, drowning, claw, or knife
So many ways to take a life.
Advertisement:

Trick 'r Treat is an anthology horror movie produced by Bryan Singer and directed by Michael Dougherty, and developed from Dougherty's 1996 animated short, Season's Greetings. The conceptual designer was Breehn Burns, co-creator of Dr. Tran. Trick 'r Treat was originally slated for a theatrical release in 2007, but was held up until a DVD release in 2009.

Set over a single Halloween night (although there is a flashback set on a Halloween thirty years prior), Trick 'r Treat is less interested in plot than it is in the holiday itself: the fears, emotions, atmosphere, and the traditions that have coalesced into what people imagine Halloween is about.

Trick 'r Treat has several subplots, loosely connected, that are the focus of this anthology:

Not to be mistaken for the similarly named 1986 film Trick or Treat.

A sequel has been in development since October 2013, and a comic book with four prequel stories called Days of the Dead was released in October 2015.