Film / In a Lonely Place 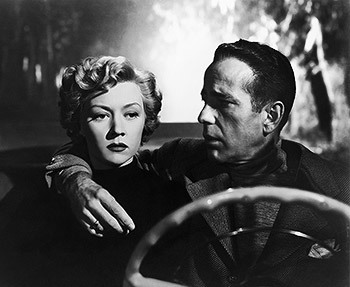 "I was born when she kissed me.
I died when she left me.
I lived a few weeks while she loved me."
Advertisement:

In a Lonely Place is a 1950 film starring Humphrey Bogart and Gloria Grahame, adapted from a 1947 novel by Dorothy B. Hughes, and directed by Nicholas Ray.

Bogart plays Dixon Steele, a Hollywood screenwriter who is commissioned to adapt a novel into a film. Too lazy to read the book, he invites the coat-check girl at his restaurant to his apartment to summarize the book for him. Hours after Steele sends her home, the girl is found murdered in a nearby ravine, and the police latch onto him as the prime suspect. Steele is given an alibi by his neighbor Laurel Gray (Grahame). After being released by the police, Steele strikes up a relationship with Gray, and they soon fall in love.

The police continue to investigate the murder, which puts a strain on their budding romance as Laurel is questioned again and learns about Dixon's history of violent incidents, making her unsure if he's really innocent. As Laurel grows wary of Dixon and he becomes suspicious of her behavior, the tension in their relationship reaches a breaking point.

A bleak thriller, In a Lonely Place is considered a classic of Film Noir.