Didn't We Use This Joke Already? 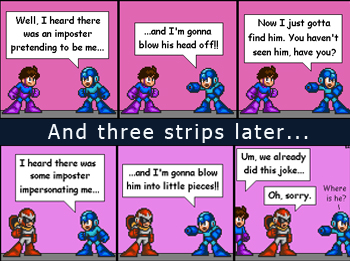 Sorry just isn't good enough, Protoman.
Ozzy: These filmmakers are just [bleep] boobs!
Kelly: What do you mean, Dad?
Ozzy: Well, they're usin' the same [bleep] jokes they did in the last Austin Powers movie.
— Austin Powers in Goldmember
Advertisement:

Basically a situation or joke played earlier in the story reoccurs and a character breaks the fourth wall, to say "Didn't we use this joke already?"

Sister-trope to Oh, No... Not Again!, in which a character comments in-universe on an action or event that is repeated in the story.