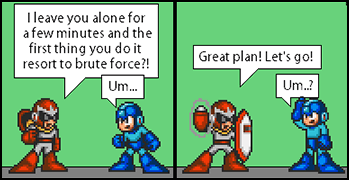 A character assesses the person, thing, or situation in front of them, and share their opinion of it. They list what would presumably be unpleasant, unfavorable, or unlikable qualities, actions, or ideas, and it seems like they are about to strongly disapprove of the whole mess. But their conclusion is the opposite of expected: they are very happy and approving. The comedy comes from the fact that obsession and revulsion can result in a similar level of enthusiasm. Beauty, fashion sense, cuisine choice, and other preferences are all in the eye of the beholder.

Unlike Bad is Good and Good is Bad, this trope is used for comedy. For example:

Bob: Look at this car! It's covered in rust, the stuffing's coming out of the seats, and you have to kick the trunk to get it to open. [smiling] Beautiful, isn't it?
Advertisement:

Can be inverted: the character describes pleasant or desirable things, like a beautiful sunny day, flowers, and puppies; then they declare their loathing for it all. May overlap with Do Wrong, Right: it may seem like the character is about to denounce evil acts because they are wrong, only to reveal they would approve of those evil acts if they were done more competently. Compare and contrast Bile Fascination and Guilty Pleasure, where a character knows something is bad or that they should not enjoy it, but they feel curiously or shamefully attracted to it anyway.

Not to be confused with Evil Virtues, which are about genuine virtues applied to evil. Compare Arson, Murder, and Admiration, Bait-and-Switch Comment, I Have Just One Thing to Say, I Like Those Odds. See also Too Kinky to Torture.