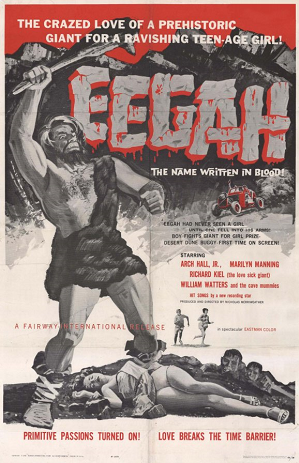 One night after shopping, Roxy Miller (Marilyn Manning) is driving home through the California desert when she nearly runs her car into Eegah (Richard Kiel), a giant caveman. She tells her boyfriend Tom Nelson (Arch Hall Jr.), and her father, Robert Miller (Arch Hall Sr.), about the giant. Her father, a writer of adventure books, decides to go into the desert to look for the creature and possibly take a photograph of it. When he fails to show up at his designated pickup time, Tom and Roxy go into the desert looking for him. Roxy is soon kidnapped by Eegah and taken back to his cave while Tom searches for her. In Eegah's cave, Roxy is reunited with her injured father, who tells her that he has begun to communicate with the caveman and has even developed a theory as to the creature's astounding longevity. When a frisky Eegah expresses what seems to be romantic interest in Roxy, her father, fearful that the creature may kill them both if he is rebuffed, suggests she put up with as much of it as she can bear. Eegah never tries anything too explicit, though, and Roxy even ends up giving him a shave before the pair is able to escape thanks to Tom subduing Eegah. Crushed, Eegah follows them back to civilization, and a final confrontation ensues during a pool party where Eegah is gunned down by the police.

After the financial success of his first venture into the drive-in/juvenile delinquency genre, The Choppers, Arch Hall Sr. was able to fund Eegah!, a starring vehicle for his son, Arch Hall Jr., who had some success with songwriter Alan O'Day on the rock and roll/blues scene in Los Angeles. Seeing Arch Hall, Jr. as a potential Elvis Presley superstar in the making, he made the movie a combination of schlock-horror and youth comedy, with a little bit of beach party film in the mix and plenty of songs for his prodigy to belt out.

Eegah! never made any real impact on cinema until it was included in the Michael Medved book The Fifty Worst Films of All Time, written in 1978. This earned it a cult film status for its sheer awfulness, which continues to this day. A clip from the movie appears in the opening montage on Something Weird DVD releases, and it was mocked by Elvira in a 2010 episode of her Movie Macabre show. That same year it was also mocked by talking skeleton Nigel Honeybone on Australia's the Schlocky Horror Picture Show. The film's greatest claim to "fame" was being the feature of an episode of Mystery Science Theater 3000, ensuring that it would be remembered for generations to come for all the wrong reasons. A scene of Arch Hall Sr. uttering "Watch out for snakes!" from offscreen in what was obviously dubbed in after filming became a minor pop-culture meme. Not only did it become a Running Gag on Mystery Science Theater 3000 in episodes after the film aired on that show, it was also referenced on The Office and used as the closing line of The Rick Emerson Show.

"Watch out for Tropes!":

Watch out for snakes!