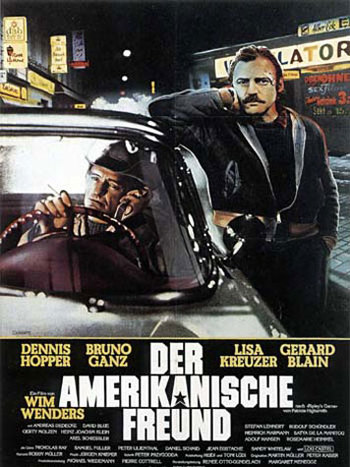 The American Friend (Der amerikanische Freund) is a 1977 film from West Germany directed by Wim Wenders. It is an adaptation of Ripley's Game, the third of five novels in the "Ripliad" by Patricia Highsmith, all featuring as a character the criminal mastermind Tom Ripley.

Despite being a German production, the film is mostly in English. Despite being an adaptation of a Ripley novel, the protagonist isn't Tom Ripley. Instead, the hero is Jonathan Zimmerman (Bruno Ganz), a picture frame maker and art restorer who lives in Hamburg with his wife and little son. At an auction, Zimmerman meets and insults one Tom Ripley (Dennis Hopper), who is currently engaged in an art forgery racket.

Ripley is told that Zimmerman has a blood disease and may be terminally ill. Meanwhile, a French gangster named Minot has approached Ripley hoping to arrange a hit on one of his criminal rivals. Ripley steers Minot to Zimmerman. Zimmerman, desperate to provide for his family and worried that he may not have long left, reluctantly accepts the job. His wife grows suspicious of Jonathan's extended absences and the large sums of money suddenly popping up in their bank account. Ripley for his part starts to feel guilty about maneuvering Jonathan, who is really a quite decent fellow, into a life of crime.

Wenders cast six film directors he knew as six gangsters. Nicholas Ray appears as the artist forging paintings by a better-known dead artist named Derwatt. Samuel Fuller appears as a friend of the gangster Zimmerman is told to kill.