Film / The Adventures of Quentin Durward 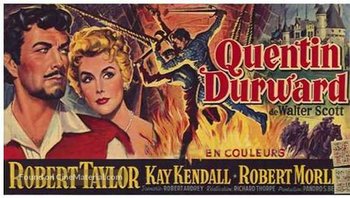 In 1465, the honorable but penniless Scottish knight Quentin Durward (Robert Taylor) goes to France to facilitate a marriage between a rich and beautiful countess, Isabelle of Marcroy (Kay Kendall) who's the ward of Duke of Burgundy Charles the Bold (Alec Clunes), and his aging uncle Lord Crawford (Ernest Thesiger). Isabelle wants none of it and flees, and Quentin becomes involved in intrigue at the court of King Louis XI (Robert Morley), who places Isabelle under his protection.

Like Ivanhoe (which was also adapted from a Scott novel) and Knights of the Round Table before it, it was directed by Richard Thorpe, stars Robert Taylor and was filmed at MGM's British Studios at Elstree, near London. It capped off a thematic trilogy, sharing the same chivalric spirit, tone and lavish production values as the two previous films.

The Adventures of Quentin Durward provides examples of: