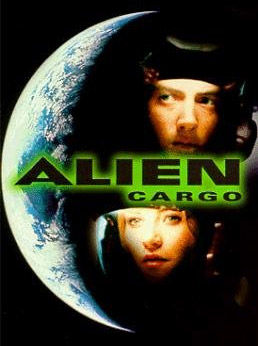 Alien Cargo is a 1999 science-fiction film.

In the future, Chris and Theta are pilots on the SSS (“Triple S”) 17 commercial transport ship travelling regular months-long trips between Mars and Titan. Most of the journey is spent in cryo-stasis, while two out of eight crewmembers remain awake in succeeding shifts. When they’re woken up by the ship’s computer they find the ship wrecked and abandoned, with no sign of the previous shift. To make matters worse, they soon discover that their ship has veered hopelessly off course, and has been adrift for over a year. As time goes on, they also find themselves growing increasingly aggressive…

The film is probably most notable for its atmospheric soundtrack and surprisingly accurate space physics.