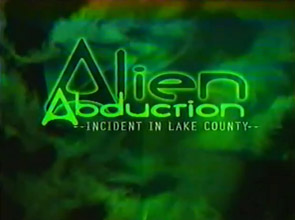 Alien Abduction: Incident in Lake County is a made for Found Footage TV horror movie which aired on UPN in 1998. It is a remake of a lower-budget predecessor known as UFO Abduction (which had been circulated in ufologist circles, sans opening and closing credits, as "the McPherson Tape"), filmed a decade before by the same director. This is sometimes the source of confusion as to which version people have seen.

The story focuses on Tommy, the 16-year-old son of the McPherson family, filming his family's Thanksgiving Day dinner on home video. When Tommy and his brothers set out to investigate a power outage, they come across a UFO and spot aliens using a laser to dissect a cow. After the aliens notice them and open fire, the McPherson family spends a harrowing night fending off an extraterrestrial home invasion.

Like The War of the Worlds before it, Alien Abduction: Incident in Lake County incited controversy, as the found footage style it was presented in caused many people to believe it depicted an actual alien abduction. The premise is similar to that of The Blair Witch Project, which it predated by a year, and the film is quite sinister and surprisingly frightening. Parallels can also be drawn to the famous Hopkinsville Goblin incident.