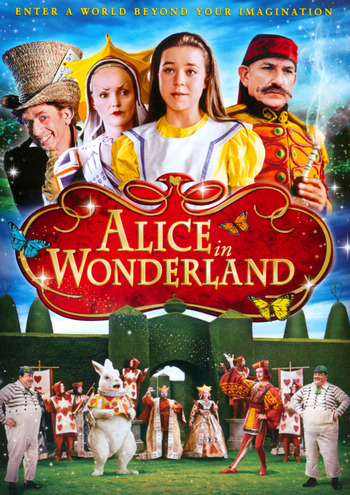 Produced by Hallmark Entertainment, directed by Nick Willing and featuring an incredibly stocked All-Star Cast, this Made-for-TV Movie version of Lewis Carroll's classic novel premiered on the NBC on the 28th February 1999. The show was a success, pulling in a viewership of nearly 26 million people, which led it to be the sixth-highest rated program that week in terms of households and the most watched program of the week in terms of total viewers.
Advertisement:

In this adaptation, Alice is expected to sing at a garden party hosted by her parents but is showing reluctance due to despising the chosen song for her and fears that singing in front of an audience of strangers. Hiding out in the bushes in the land of her country home, Alice is met with the bewildering sight of an apple breaking from a tree branch and slowly spinning down through the air to meet her at her eye level. This is followed by the appearance of a white rabbit dressed in a waistcoat and shouting he's late. If you are familiar with the story from here, you know where this goes.

Alice ends up in Wonderland, intending to follow the White Rabbit until she opens a door and sees a beautiful garden that she thinks will be a safe haven for her to hide. The problem is, she's too big to fit through the door. Sooner than she thinks, Alice is on a whirlwind of an adventure, where she will meet characters strange, mad and even inspiring.

These tropes can be found somewhere in Wonderland. Just watch your head.