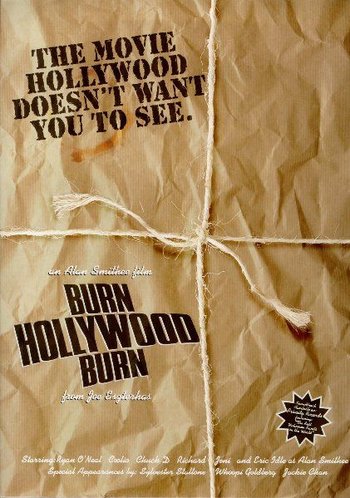 They weren't kidding with that tagline.
Advertisement:

An Alan Smithee Film: Burn Hollywood Burn is a 1998 American mockumentary comedy film directed by Arthur Hiller (in his final theatrical film), written by Joe Eszterhas, and starring Eric Idle. It is a satire of the filmmaking business.

A director (Idle) has been allowed to direct Trio, a big-budget action film starring Sylvester Stallone, Whoopi Goldberg and Jackie Chan (all three of them played by themselves). The studio recuts the film, and when the director sees the results, he wants to disown the film. Problem is, he can't use the Alan Smithee pseudonym used in Hollywood when someone does not want to have their name attached to a bad film, because his name is Alan Smithee, so he steals the film negative and goes on the run, threatening to destroy it.

The film is best known for how its plot eventually, and ironically, described the film's own production: director Hiller requested that his name be removed from its credits after witnessing the final cut completed by the studio. The film's creation set off a chain of events which would lead the Directors Guild of America to officially discontinue the Alan Smithee credit.