Film / An American Werewolf in Paris 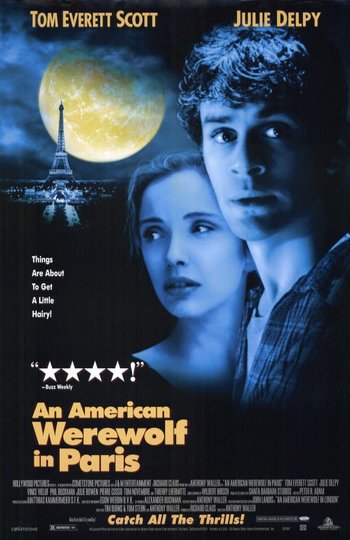 "It took me four years on a stairmaster to get a package like this. You ripped through it like a lamb chop!"
— Amy Fitch, newly risen as a zombie
Advertisement:

An American Werewolf in Paris is a spin-off of An American Werewolf in London that was released to lukewarm reviews (at best) in 1997. It includes some of the elements of its predecessor, such as attempts at lighthearted humor and having a werewolf's victims appear as mutilated ghosts. What it lacks, and what caused many reviewers to complain, are the brutal yet enthralling make-up effects of the first movie, which have been replaced with a heavy dose of CGI.

The story is centered on Andy McDermott (Tom Everett Scott), an American student who is traveling in Europe with his two friends when he falls in love with a French girl named Serafine (Julie Delpy), after saving her life during her suicide attempt. He tracks her down in an attempt to woo her, and eventually winds up getting invited to a club by one of her friends, who promises that she'll be there too. The club turns out to be a trap, where the owners lock the doors, transform into werewolves and feast on the unwitting patrons. One of his friends is killed, but Andy escapes... with just a bite. He is surprised to wake up in Serafine's bedroom, who is kind enough to take off her shirt for him, offer him a glass of freshly-pureed hearts and tell him he's a werewolf now... and she would know, because she's one too.

He refuses to accept this and flees her house, but is forced to accept that it's true after he kills a fellow American tourist named Amy, who also rises as a member of the undead to torment him. He goes back to Serafine, who tells him that the club owners are after a serum her stepfather created that will cause them to transform into werewolves instantly, even when it's not a full moon. Sure enough, they succeed in stealing it, so Andy and Serafine team up to stop their fellow werewolves' reign of terror, avenge their friends' deaths, and maybe even put and end to their own curse....

An American Werewolf in Paris provides examples of: