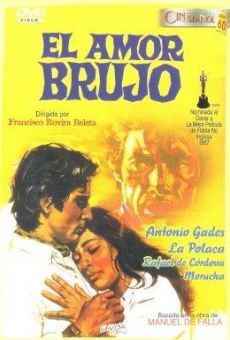 El amor brujo (aka "Bewitched Love") is a 1967 film from Spain directed by Francisco Rovira Beleta.

It is an adaptation of the famous Spanish ballet El amor brujo, although it makes some major revisions to the ballet's plot. The protagonist is Candela, a young woman who lives in the coastal town of Cadiz and helps her father, who is a fisherman. In the backstory, Candela was the lover of a dangerous hoodlum named Diego. However, at the beginning of the film Diego is killed in a knife fight with another hoodlum on the beach. Candela finds herself well rid of the violent, abusive Diego, instead dating a much more suitable Nice Guy named Antonio.

The only problem is, Diego seems to be haunting her. She keeps having nightmares of finding his dead body on the beach, his face mashed in post-mortem. She starts hearing his voice calling to her. She begins to see him at various places around town. Then she sees his face at the window...

In 1986 another adaptation of the ballet, also titled El amor brujo, was released.