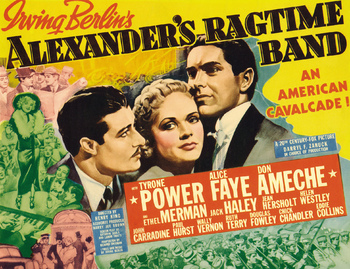 It is a musical based on the songs of that legend of Tin Pan Alley, Irving Berlin. A violinist named Roger (Power) has ambitions to make it as a bandleader in the emerging genre of swing music. His band, which includes his best friend Charlie (Ameche), finally gets a chance to play in a San Francisco dive bar. There they meet singer Stella Kirby (Faye), and via a heavy dose of Meet Cute she becomes the singer in their band. They climb the ladder of success, graduating from dive bars to respectable theaters, and Roger (now called "Alec" after the song "Alexander's Ragtime Band") and Stella fall in love. However, after Stella gets an offer to star on the New York stage, she and Roger/Alec break apart.

Originally supposed to be a Biopic of Irving Berlin, but became a fictional story after Berlin balked. Ethel Merman plays Jerry, Stella's replacement as singer for the band. John Carradine has a small part as a cab driver. Alfred Newman arranged the Irving Berlin soundtrack for the screen.