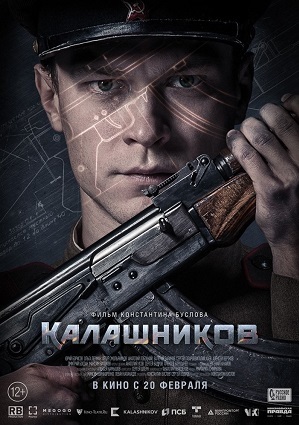 In America you make guns. In Soviet Russia the gun makes you.
Advertisement:

AK-47 (Russian title: Kalashnikov | RU:Калашников) is a 2020 Russian biographical movie about one Mikhail Timofeyevich Kalashnikov (Yuri Borisov) that begins during his service in the Red Army in WWII and chronicling his eventual engineering journey towards inventing the future of automatic firearms as well as Russia's all-time greatest export: The Avtomat Kalashnikova assault rifle.

In 1941, Red Army tanker, Sergeant Major Mikhail Kalashnikov is wounded-in-action and is then sent back home to recuperate. On his journey back, he is inspired by his experiences on the front lines as well as constant complaints from his fellow soldiers about the sorry state of their issued weapons. Stopping by his old worksite at the Matay locomotive plant, he pours his heart and soul into building a reliable gun worthy of the Red Army. After a rocky start, he soon enters the professional world of military firearms development where he will eventually rise to the challenge of finding his place amongst legendary Soviet gunsmiths, as well as discovering love and purpose in his personal life.