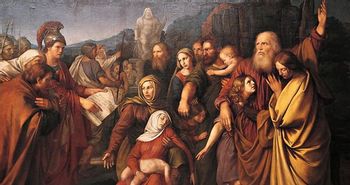 Under the Achaemenid Persians and Alexander the Great, Jews had enjoyed a large amount of autonomy. With Alexander's death, however, his empire became divided between his generals and their descendants, with Judah frequently being conquered and reconquered by neighboring Egypt and Syria. During this time, Jewish culture became increasingly exposed to Greek influence, with a growing number of Jews abandoning traditional religious practices (notably circumcision) in favor of assimilation into Greek society.

This cultural assimilation offended the Chashmonayim, a family of priests based in the city of Modi'in, who began an insurgency against the then-Syrian occupiers. In response, the Syrian leader Antiochus sacked and leveled Jerusalem, going so far as to murder worshippers in the Temple itself and then sacrifice a pig to Zeus. This action deeply antagonized the moderate Jewish elements, and despite winning repeat tactical victories, Antiochus' forces soon lost more and more ground. The Chashmonayim leader Judah Maccabee captured Jerusalem soon after, taking eight days to re-consecrate the Temple and formally declare independence (this is where Hanukkah originates).

Soon after, Antiochus died. The ensuing power vacuum caused Syria to collapse into a multi-sided civil war and series of coups, enabling the newly-independent Judea to gradually recapture its former territory, ending the revolt. Afterward, Judea signed an unequal treaty of alliance with Rome, who eventually conquered Syria, while Judea expanded outward into an area slightly larger than modern-day Israel and the Palestinian territories. Eventually, the Romans modified their treaty to make Judea a vassal state. Judea nullified the treaty, resulting in a Roman invasion and the appointment of Herod the Great as King.

This revolt is celebrated by Jews in the holiday of Hannukah, the "festival of lights". In rather an Irony, in America this holiday is in practice an expression of a mildly ecumenical spirit, tacitly designed to make sure Jews get to celebrate on Christmas too and thus something of an attempt to help Jews and gentiles live together. Rather amusing as it was originally about a nasty Culture Clash.